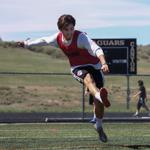 With the weather heating up, so is the USL2 team. Sami Owusu and Jerry Gutierez were able to keep their fitness up over the weekend by playing pick-up games with friends in their areas. The team was physically and mentally challenged in today’s training session. We were able to see players rise up to this challenge and really work through it. Coach Lewis is really looking forward to seeing the player’s mentality improve throughout each training session. Unfortunately, with no games to look forward to yet, he stated, “that it is all about the mentality to want to get better and take advantage of each and every training session”.

Divided into three separate teams (red, yellow, green), the players were ready to work hard and have a bit of some friendly competition. The yellow team started out at the first station, playing soccer tennis. Bailey and Tristan were able to show some great teamwork and fancy footwork to come out in lead against the players they were competing with. The red team started with a finishing drill that tested both the field players and goalies. We saw some quality finishes from Sami during this drill. The third group worked on movement off the ball with a progression passing drill.

The training session finished up with small sided games and some fitness. While two teams were in the game, the third team was working on building their fitness on the side with sprints up and down the pitch. With the competition running high, the red team was able to win every game. Jerry and Ben Shepherd had numerous goals that helped lead their team to victory. Both Coach Elliot and Coach Lewis are highly motivated to help this team improve their development. The players as well are highly motivated to get better and play at that next level. That wraps up this week’s first training session.