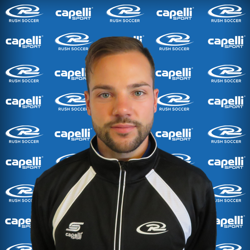 The Colorado Rush announced today that the club has promoted Elliot Prost to the Head Coach position of the United Soccer League Two (USL2) team.  Joe Webb who had been serving as the head coach in the interim will continue in the Director of Operations position.

“We are really proud of Elliot and his continued growth within the Colorado Rush family,” said Joe Webb. “Coach Elliot continues to work really hard and has been instrumental in the development of our players in the club and now he can use those abilities to to be the leader of our USL2 program.”

Elliot Prost is originally from Dijon, France. He spent his youth career (U14-U19) at Dijon FCO and played with the reserve team for a season at the senior level. In 2011, he moved to the USA to play collegiate Soccer and further his education. He graduated in 2015 from Fort Lewis College with a degree in Psychology.  After graduating Elliot played in the USL2 for FC Tucson and Albuquerque Sol.

Prost began his coaching career for Rush Soccer in 2017. Alongside his role on the USL2 team he is also the Youth Boys Director of Coaching overseeing U11-U14 age groups at Colorado Rush. Elliot also coaches in the Developmental Academy program as head coach for the U13 & U17 groups.

“This is a really exciting opportunity, to be coaching the Colorado Rush senior team has always been a goal of mine, as it represents the final layer in our club pyramid. This is exciting news also for all of our youth players in the club, as there is now a clear pathway from our academy teams to the USL. The gap is now bridged between the club youth side and one of the top senior leagues in the country.”, Said Prost,“I look forward to getting to work with a great group of players. The high caliber of players coming into this  program is a strong sign that the Colorado Rush USL II is an attractive program and the players want to be here. Our staff is eager to make this a great experience for the players and impact their development in the most positive way”

This Colorado Rush coaching staff enters into the league as the new kids on the block but are looking to come in as contenders in the league right away. It’s going to be fun to watch and track this group’s progress throughout the upcoming 2020 campaign.

Based in Littleton, Colorado, the Colorado Rush Soccer Club is a non-profit charity  501 (c)(3) organization established to provide an unparalleled personal growth experience through the game of soccer and to promote life-long participation in the sport.  Formed in 1997 through a merger of two local clubs, Club Columbine and Lakewood United Soccer Club, the Rush now services over 5,000 youth players on an annual basis. As a member of the United States Youth Soccer Association and US Club Soccer, the club offers recreational and competitive programs for players of all ages and abilities from 3 years old to adults.

A part of United Soccer Leagues, LLC, which also operates the USL Championship, USL League One, Super Y League and the new USL Academy, USL League Two is the top pre-professional soccer league in North America, offering a summer platform for aspiring professionals across the United States and Canada. League Two is the defined and proven pathway for players to progress to the ranks of professional soccer, while its clubs become fixtures in the communities where they operate. More than 70 percent of all MLS SuperDraft selections since 2010 have League Two experience, including 66 alumni chosen in 2018 and 61 in 2019. Werder Bremen’s Josh Sargent, Newcastle United’s DeAndre Yedlin, and Atlanta United’s Brad Guzan are among the many U.S. National Team players to have competed in USL League Two before making their professional debuts.

Rush Soccer is committed to providing an unparalleled soccer experience for all who have an interest in the game of soccer. Rush Soccer promotes the development of character, the electricity of competition and the importance of pure enjoyment. We accept the responsibility of teaching life lessons to our athletes to further their growth inside the game and out. We believe that all players should be afforded an equal opportunity to explore their potential and participate in challenging circumstances that will yield positive outcomes. We are committed to making soccer a pleasant, safe and rewarding experience for everyone involved, regardless of age or ability. Through quality coaching, sound leadership and absolute sincerity, Rush Soccer will work to be the best soccer club in the world.